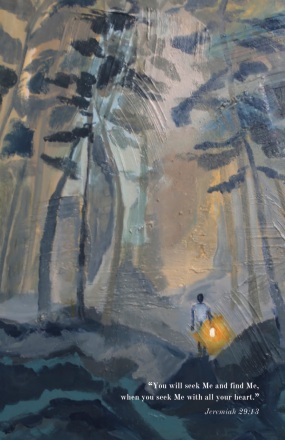 O Source of all good,

what shall I render to Thee for the Gift of gifts,
Thine own dear Son, begotten, not created,
my Redeemer, proxy, surety, substitute,
His self-emptying incomprehensible,
His infinity of love beyond the heart’s grasp.

Herein is Wonder of wonders:

when I cannot rise to Him He draws near on wings of grace,
to raise me to Himself.

when Deity and humanity were infinitely apart
He united them in indissoluble unity,
the uncreated and the created.

when I was undone, with no will to return to Him,
and no intellect to devise recovery, He came, God-incarnate,
to save me to the uttermost, as man to die my death,
to shed satisfying blood on my behalf,
to work out a perfect righteousness for me.

—from The Valley of Vision

And they heard the sound of the LORD God walking in the garden in the cool of the day, and the man and his wife hid themselves from the presence of the LORD God among the trees of the garden. But the LORD God called to the man and said to him, “Where are you?” And he said, “I heard the sound of you in the garden, and I was afraid, because I was naked, and I hid myself.” He said, “Who told you that you were naked? Have you eaten of the tree of which I commanded you not to eat?” The man said, “The woman whom you gave to be with me, she gave me fruit of the tree, and I ate.” Then the LORD God said to the woman, “What is this that you have done?” The woman said, “The serpent deceived me, and I ate.”

The LORD God said to the serpent,

“Because you have done this,
cursed are you above all livestock
and above all beasts of the field;
on your belly you shall go,
and dust you shall eat
all the days of your life.

Therefore the Lord Himself will give you a sign. Behold, the virgin shall conceive and bear a son, and shall call His name Immanuel.

For to us a child is born,
to us a son is given;
and the government shall be upon His shoulder,
and His name shall be called

Of the increase of His government and of peace
there will be no end,
on the throne of David and over his kingdom,
to establish it and to uphold it
with justice and with righteousness
from this time forth and forevermore.
The zeal of the LORD of hosts will do this.

In the sixth month the angel Gabriel was sent from God to a city of Galilee named Nazareth, to a virgin betrothed to a man whose name was Joseph, of the house of David. And the virgin’s name was Mary.

And the angel said to her, “Do not be afraid, Mary, for you have found favor with God. And behold, you will conceive in your womb and bear a son, and you shall call His name Jesus. He will be great and will be called the Son of the Most High. And the Lord God will give to Him the throne of his father David, and He will reign over the house of Jacob forever, and of His kingdom there will be no end.” And Mary said to the angel, “How will this be, since I am a virgin?” And the angel answered her, “The Holy Spirit will come upon you, and the power of the Most High will overshadow you; therefore the child to be born will be called holy—the Son of God.

And Mary said, “Behold, I am the servant of the Lord; let it be to me according to your word.” And the angel departed from her.

In those days a decree went out from Caesar Augustus that all the world should be registered. This was the first registration when Quirinius was governor of Syria. And all went to be registered, each to his own town. And Joseph also went up from Galilee, from the town of Nazareth, to Judea, to the city of David, which is called Bethlehem, because he was of the house and lineage of David, to be registered with Mary, his betrothed, who was with child. And while they were there, the time came for her to give birth. And she gave birth to her firstborn son and wrapped Him in swaddling cloths and laid im in a manger, because there was no place for them in the inn.

And in the same region there were shepherds out in the field, keeping watch over their flock by night. And an angel of the Lord appeared to them, and the glory of the Lord shone around them, and they were filled with great fear. And the angel said to them, “Fear not, for behold, I bring you good news of great joy that will be for all the people. For unto you is born this day in the city of David a Savior, who is Christ the Lord. And this will be a sign for you: you will find a baby wrapped in swaddling cloths and lying in a manger.”

And suddenly there was with the angel a multitude of the heavenly host praising God and saying,

“Glory to God in the highest, and on earth peace among those with whom he is pleased!”

When the angels went away from them into heaven, the shepherds said to one another, “Let us go over to Bethlehem and see this thing that has happened, which the Lord has made known to us.” And they went with haste and found Mary and Joseph, and the baby lying in a manger. And when they saw it, they made known the saying that had been told them concerning this child. And all who heard it wondered at what the shepherds told them. But Mary treasured up all these things, pondering them in her heart. And the shepherds returned, glorifying and praising God for all they had heard and seen, as it had been told them.

And the Word became flesh and dwelt among us, and we have seen His glory, glory as of the only Son from the Father, full of grace and truth.

Since therefore the children share in flesh and blood, He Himself likewise partook of the same things, that through death He might destroy the one who has the power of death, that is, the devil, and deliver all those who through fear of death were subject to lifelong slavery. For surely it is not angels that He helps, but He helps the offspring of Abraham. Therefore He had to be made like His brothers in every respect, so that He might become a merciful and faithful high priest in the service of God, to make propitiation for the sins of the people.

Long ago, at many times and in many ways, God spoke to our fathers by the prophets, but in these last days He has spoken to us by his Son, whom He appointed the heir of all things, through whom also He created the world. He is the radiance of the glory of God and the exact imprint of His nature, and He upholds the universe by the word of His power. After making purification for sins, He sat down at the right hand of the Majesty on high, having become as much superior to angels as the name He has inherited is more excellent than theirs.

When He brings the firstborn into the world, He says, “Let all God’s angels worship Him.”

These lessons were presented as the structure of the 2016 Festival of Lessons and Carols at First Evangelical Church in Memphis, Tennessee on December 11. You can find the entire program HERE.