HE IS RISEN INDEED! Easter in Eastern Europe 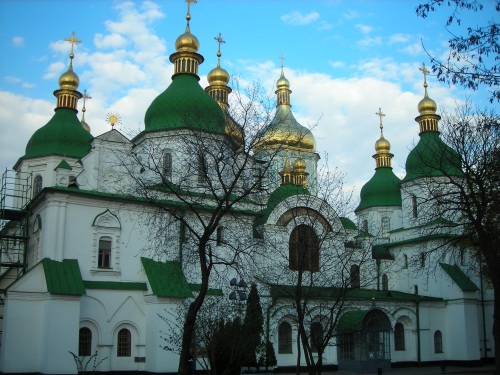 In my years of teaching internationally on worship, I have had the opportunity several times to be in different parts of Eastern Europe during the Easter season (specifically Ukraine and Moldova). I was struck and moved by the intense nature of their celebration of the Resurrection of Jesus Christ.

It is interesting that the Baptist churches (which, along with Pentecostals, are the largest Protestant group in those countries) have borrowed spoken and sung litanies from the Eastern Orthodox tradition prevalent in those countries.

The Orthodox Paschal greeting is familiar:

Then immediately a big chord would be intoned by the organ, at which point the congregation would break into a hymn they obviously knew well and sang often. This hymn is known as the Paschal troparion, also from the Orthodox tradition, and powerfully exclaims:

A very moving congregational affirmation in song of the truth of the Resurrection.

Not only does the Paschal greeting play an important part in public worship there. But Christians also greet one another personally with this exchange: in the halls of the church, before and after services, and also when they encounter one another on the street. And this continues not just on Easter Sunday, but indeed during the entire Easter season.

When I taught once at a little Bible school in Moldova during an Easter season, all the tables in the school cafeteria were likewise fitted with cards on the Paschal greeting was written. Just another way to keep before the students the significance of the event, and the season, of the Resurrection.

EASTER AS A SEASON AND CONTINUING CELEBRATION

Because indeed Easter is a season, not just a day. In the Western liturgical tradition the season is known as Eastertide, or the Great Fifty Days, lasting from Resurrection Day through Pentecost; the Eastern Orthodox tradition celebrates Pascha for 40 days, ending with Ascension Day. (For more on Eastertide, please see Worship Notes 11.4.)

In our church we will often continue to celebrate Easter on the Sunday after Easter as well (or, as it’s called in the liturgical Western tradition, the Second Sunday OF Easter). One reason is simply that there are so many fine hymns and songs that express Resurrection truths, far more than we can fit into just one week’s service.

But, more importantly, we do this in order to remind our people that Easter is in facta season and also a continuing celebration, not just a “one and done” day. In fact, Laurence Stookey in his wonderful book Calendar: Christ’s Time for the Church makes this incisive observation:

Many active Christians would say that Christmas is their chief festival. Closer to the mark, but still missing it, are those who would say that Easter Day is the principal feast of the church. What is amiss about such assessments? Simply this: No observance that occurs only once a year can connote the continuing work of God in daily life. Therefore the chief festival occurs weekly, and from it all else is derived, including those annual festivities that may be more visible and certainly are the more popular cultural occasions. . . . It has become a maxim of late that “every Sunday is a little Easter.’” But it would be more accurate to say that “every Easter is a great Sunday.” (44,54)

For we gather every week on the first day in remembrance and celebration of Christ’s glorious Resurrection, and the new work and age that it ushered in. Sunday is the not only the First Day (hearkening back to the beginning of creation), but also is sometimes called the Eighth Day (as the inauguration of the risen Christ’s reign).

Every Sunday is the chief festival of the Church!

Posted by ronmanwri on April 18, 2019 in Easter, Resurrection